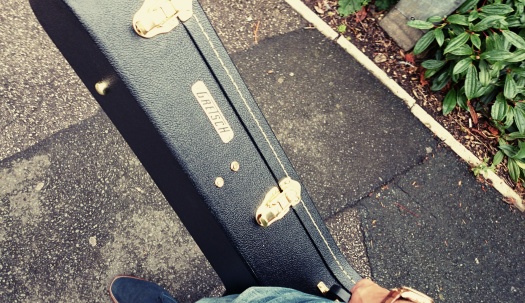 Spent an entertaining day in the studio today, laying down audio for our top secret work throughout 2016.

It’s a pleasure to have programmer/designer/producer Hugo Glenwright on board! I can see 2016 becoming one of our most exciting years for production work: everything is looking to be on a much bigger and more complex scale in terms of our audio-visual as well as dance, script and ensemble work.

Can’t wait to get rolling in full! 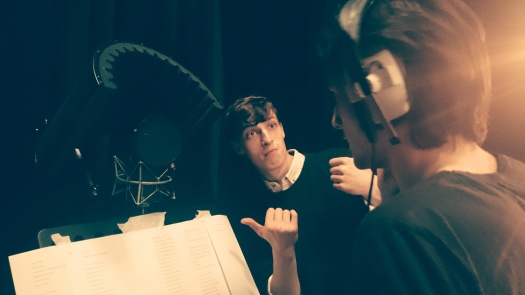 When he’s not running Rackmount Record’s, record label CEO, Hugo Glenwright is an outstanding programmer and AV Designer. To which end, we’ve brought him on board as a partner at VIAPERFORMANCE. Together, we’ve been building something pretty damned exciting.

Working towards our top secret 2016 project, we’ve been designing, constructing and writing code for an AV Server.

Keeping it short, sweet and vague (top secret, remember), we need to be able to projection map, sending mad mapper, arena and some top secret cue running software out to more than ten outputs; which means building an AV Workhorse.

Here’s our work so far…

^ In go the extra fans and the compact mother board (more room for the pipes on the liquid cooling system).

^ In goes one of the SSDs, with plenty of room for the HDD Array (this tower case is incredible value for money by the way).

^ In goes the processor and the lovely liquid cooling system. (This thing runs cold cold cold).

Things got a little bit more secret (also fucking finickity, so no photos) after this, but the rest of it was basically racking bits, extra fans, some LEDs (couldn’t help ourselves) and sets of PCIe and SATA options for I/Os.

And it ends up looking like this, the beast (the cheeky giant anteater is 10″ tall, for scale). Now to write the bootloader and some sneaky code. By the way, we’re definitely not going to tell you what OS we’re running on this home build. We’ll leave that to your guess.

Right now I’m on a research project for VIAPERFORMANCE, aboard the epic Ghan Train.

I’m in Australia, working towards our next piece (which is currently top secret) by studying aboriginal myth and the development of oral histories (in Litchfield and Kakadu national parks). I’ll also be looking into human migration history and winemaking (in the Barossa, just outside of Adelaide) and playing a couple of tour dates with my singer songwriter mom (who is considerably cooler than I am, at 60).

Having flown to Adelaide last week, I’ll now be spending three days on the train, getting to Darwin, then four days driving, camping and hiking with aboriginal guides up in the outback of Northern Territories. After that, I’ll spend a couple of weeks with my South Australian family back in Adelaide, the home to Jacob’s Creek, Wolf Blass, Hardys and a bunch of other less well known independent vineyards.

So the train is huge. As in, it’s kilometre long. Also my room onboard has a shower, beds and a breakfast table. Also, the train has a free bar and a michelin star restaurant. I can see how this is going to pan out. 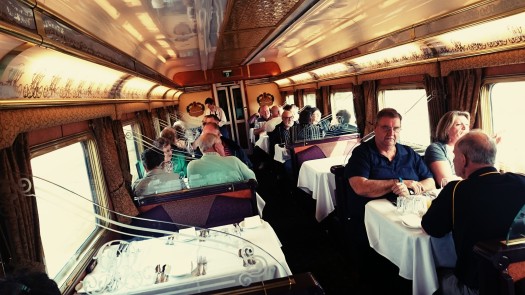 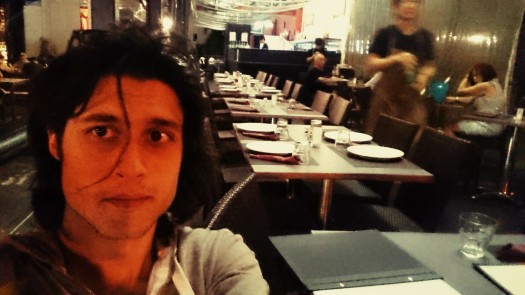 Darwin is interesting, also sticky. Lots of interesting south-east Asian food up here too. It’s easy to forget how close to the Indonesian peninsular northern Australia really is.

I just got back from four days hiking in the national parks here, where I had the privilege of hearing a whole lot more about Dreamtime storytelling than I expected, and saw some of the most amazing, millennia-old cave paintings of gods and spirits (including one fellow who looked like a jaunty Babadook) and had chance to be taught aboriginal history in what might be the world’s oldest lecture theatre (which is on top of a mountain, and over five thousand years old).

Also, I had to replace the tire of an armoured personnel carrier, in a crocodile filled gully, 400km from the nearest gas station, garage or, indeed, decent tool kit. Standard Australia.

Australia is truly bloody big… Having experienced that out here, it’s easier to see, now, how stories passing from tribe to tribe, within an oral tradition, have built so complex a web of unwritten texts, the unspoken literature of an ancient culture, still in use today. Perhaps the most interesting output of that (for someone interested in french philosophy and the writing of theatre shows at any rate) is the blurring of fact and fiction into a rich tapestry, where history is unstable and nothing quite certain, but where all remains important, networked and valuable to the community in which it operates.

UPDATE THREE
Check out that Mad Max vista… I just flew back to Adelaide, where I am now hitting the museums and galleries, learning about winemaking and human migration.

Migration is an understandably dominant theme in Australian art. It’s something I picked up on in my 2014 visits to Hobart and Brisbane, which I hope to expand on now, here in Adelaide. I also got chance to revisit one of my favourite artists (the very scenographic), Jefrey Smart.

I also went back to the venue where it all started for me, The Adelaide Festival Centre, where, in 2009, I saw The Pyjama Girl. That’s the piece that kickstarted my interest in contemporary theatre and which, ultimately, got me working with co-director Rich Wade, back at York St John.

And finally, I took some time out to play a couple of tour dates and attended some belly-dancing classes. Safe to say, I learned a lot and have (for the benefit of your eyes) decided to post a safe picture of my post-class meal at the excellent Paddy’s Lantern Bistro, Adelaide, rather than anything of my personal (and terrible) bellydancing form. 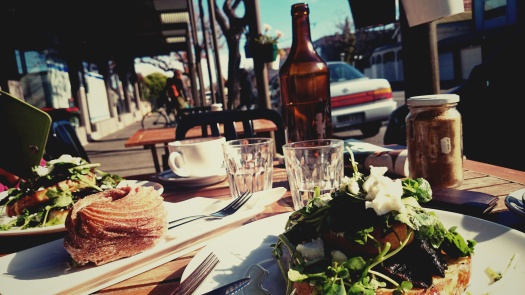 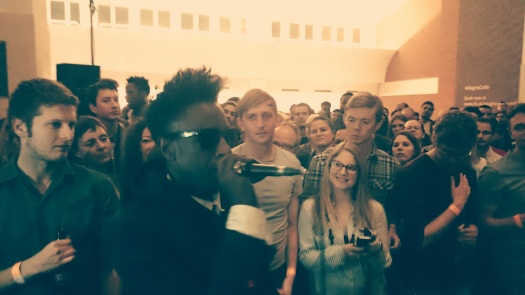 We headed down to London yesterday for a meeting with motion graphics designer, Matt Derrick, then carried it over into our attendance of an unusual appearance of poet-performer and hip hop activist, Saul Williams, at The British Library.

Matt joined us and we ended up dancing all night with Williams, who joined us on the floor and (to my excitement) let me join him on the mic for the inspirational diaspora-anthem, Black Stacy.

Saul is one of our biggest theatrical, musical, lyrical and textual inspirations; his ambitious work Trent Reznor (another of our inspirations) blew me away in 2006/7 and I’ve been hooked since. The guy is a legend and this is a shout out and plug for his new album: when it comes out, check out MartyrLoserKing. 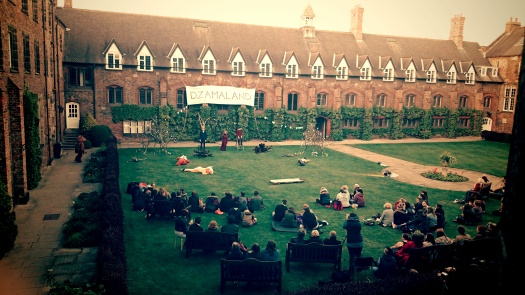 Well that’s kickoff – and a much enjoyed glass of wine as I watch (from a first floor window) my first year students at York St John University launch our annual CREATE Festival with their absurd DZAMALAND.

Five years ago today, VIAPERFORMANCE opened our first show, at the very same festival. Nowadays I just program and stage manage it. How times (sort of don’t) change.

Time to kick back and manage a festival. 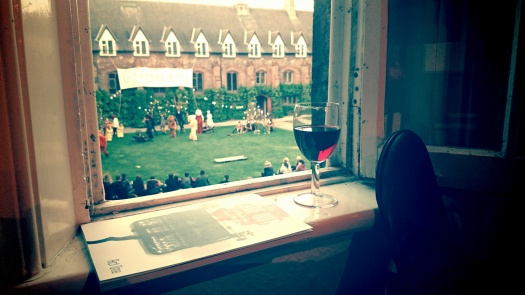 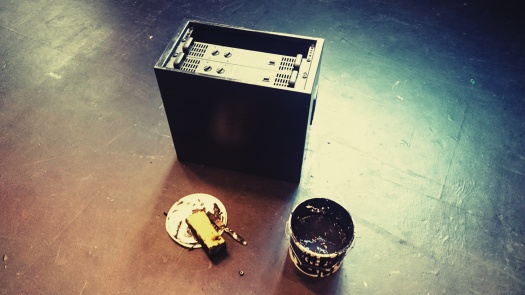 We spent this afternoon pulling apart some of our old amps, cables, speakers and racks, mending them and putting them back together as a moving in present to our fellow York theatre company The Flanagan Collective, who are currently relocating into their community renovated, pop up pub and venue, The Fleeting Arms.

It’s right on our doorstep, on Gillygate, York. It’s looking vibrant and eclectic and we hope it brings some new work into the city!

VIAPERFORMANCE have been making obnoxiously loud music in York for the last five years, so, when everyone’s pitching in, it seems appropriate that we supply and install the sound-system. We had some help getting it over there (it’s fucking heavy, mate) from our friendly neighbours and collaborators, recording label Rack Mount Records.

There’s more info in this press release, and a shout out for VIAPERFORMANCE co-director Rich Wade’s other company, Four Shadows (who seem to have been interviewed whilst doing the paint job). Check it out! 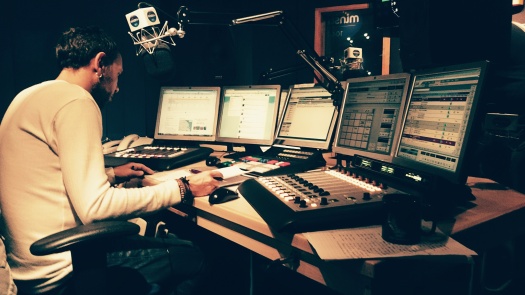 So tonight we’re in the studio with Rick Witter of Shed Seven (above), for a live interview with Minster FM and Rick’s own Podcast.

This post’s coming live from the studio (where I’m currently sat, waiting to go back on air). The whole thing’s come as a bit of a surprise (if a pleasant one). Off air, we’ve spent most of the evening getting to know one another whilst discussing coffee, tour buses and the best route to the Lake District. On air, we’ll be talking about music, festivals and touring theatre!

It’s a pleasure to be here with Rick. He’s a lovely bloke who invited us to do a radio interview after coming to see our work at Illuminate York. Tonight he’s interviewing me (above) about our work, the world of crowd-sourcing and arts funding, our creative direction as a company and what it’s like to be a touring dance, live music and theatre outfit in 2014.

Tune in if you want to hear. Rick’s also taking questions through Twitter.

Rick just described us as family friendly, but sounding like a dark disco and looking like an acid trip gone right (which he assures me is to be taken as a compliment). Nothing like a bit of Praise from Caeser!

Time to get back on the air though… We’ll upload a link to the interview as soon as it goes to Podcast. 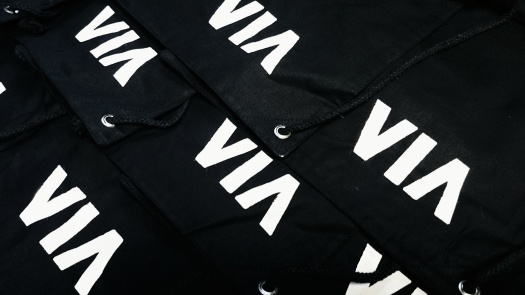 To all of our fans, and to everyone who found us through Kickstarter…

Thank you for your kind messages and the support you’ve shown us over the last three weeks.

We’re going to put your money to good use. And be assured, you’ll be invited!

Thank you, from Kiran and Rich (and the rest of the team) here at VIAPERFORMANCE!

This post comes live from opening night! We’re having a fantastic night so far, with huge crowds and loads of audience interaction! Come on down and join us!

To mark the opening night of our latest show at Illuminating York, we’ve also launched a new Kickstarter Campaign!

We love public donations, but we want to give something back. So we’ve created a kickstarter with a range of rewards for people’s pledges including moral warmth, phone calls of thanks, studio tours, lunches and dinners in with our production team, the opportunity to get creatively involved with our next project and even an improbable but inescapably spectacular party – for the most ambitious of donators.

So it’s gorgeous weather and here we are, loading Then chocolate it shall be… ready for Illuminating York 2014!

Just look at all this blue sky… That’s what we like to see!

Time to get our kit into the trucks and hit the road!